Before leaving Pakse we’d stopped in one more time at the Bolaven Café to transfer the photos I’d taken to Dave the General Manager.  While we were doing this we struck up conversation with Dave’s neighbour, Mark, an American English teacher, who happened to be in the café at the time. On learning we were headed across the border the next morning to Ubon Ratchathani in Thailand, Mark strongly advised us to check out Peppers, which was on the way.

The next morning as we crossed over from Laos into Thailand I was acutely aware of the differences between the two countries.  Peering out the bus window the scenery is pretty similar either side of the border, jungle interspersed with the odd village.  Study a bit harder however and you notice that the road quality significantly improves, there are more concrete than wood dwellings and the choice of shops and eateries in the towns has significantly multiplied.

The recommended Peppers is a good example of this, run by an Australian just over a kilometre outside of Ubon Ratchathani Airport, it serves a range of Australian café favourites, including meat pies, something I hadn’t eaten for a long time, and with ever sought after free wifi, a great place to while a few hours waiting for a flight.

We left Peppers in late afternoon light, intending to walk into the airport.  As I was just commenting it’d be the first airport I’d ever walked into a group of middle-aged Dutch guys pulled over in a 4WD with a tray back and asked us if we needed a lift.  Throwing our bags and us into the tray Susi and I soon found ourselves braced against the wind and passing through the airport entrance.

For our final destination we’d originally planned to head to the Philippines on the basis that it’s a country I’d never been to.  After a weary day of searching the Net and triangulating flights from Laos and then back to Australia via Singapore it became all too hard and we went back to first principles, considering what we actually wanted out of our final destination.

After all we’d seen we were effectively seeking a holiday from our travels, a time to spend simply near the beach enjoying the tropical weather.  Fortunately the answer was in front of our faces, or all around us in the form of Thailand, and more specifically Koh Lanta.  This choice proved to be more fortuitous when we learnt of typhoon Bhopa that hit the Philippines around the time we would have been arriving.


I hadn’t previously considered Thailand as a destination, in my mind it’s a destination synonymous with pissed up lager louts and kiddie fiddlers, but in Koh Lanta we discovered another side to the country, one strangely enough with a distinctively Swedish flavour, to the extent that I feel the Swedish map of Thailand solely consists of the island of Koh Lanta.


We’d pencilled in 11 days for our stay on Koh Lanta and split our time between accommodation on Klong Dao (the Swedish family beach) and the next beach south, Phrae Ae (Long Beach).  The west coast of Koh Lanta consists a series of stunning beaches, split by peninsulas of shoreline jungle vegetation.  Each beach differs and the further south you tuk tuk the more isolated and bohemian the accommodation, bars and dining options become and the greater the feeling of an isolated tropical paradise.

Our accommodation, Golden Bay Cottages on Klong Dao, was a peach, an air-conditioned little bungalow with a decent sized pool right outside the front door and the beach another 25m or so further on, allowing me to roll out of bed, head for an early morning jog along the beach before cooling in the ocean and then washing the salt off with the pool shower before heading to breakfast.


Given the time we had on Koh Lanta Susi decided she was keen to obtain her open water dive licence as I had done several months earlier in Honduras.  I hadn’t used my licence since obtaining it, but given Susi would be out each day doing her course, thought it was a good opportunity to complete my advanced diving licence.  Making our way round to a diving school to enquire about the availability of courses we promptly found ourselves back reclining in our accommodation pouring over our course material in preparation for the next day of diving.

While the focus of the open water course is on how to handle emergency situations, the advanced is significantly more interesting, consisting a series of modules, such as refining your buoyancy, searching for objects, diving deeper to 30m and having more of a clue as to what that rainbow coloured fish actually is. 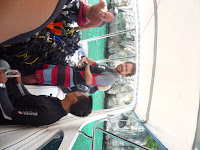 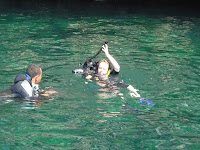 We chose a boutique’esque diving school, the aptly named Dive and Relax, which uses a speedboat to access the offshore dive sites at the base of rocky outcrops in the midst of the ocean. As the only one doing the advanced course at the time I had the luxury of my own instructor and with the speedboat we wasted no time each morning bombing across the top of the sea to the variety of dive sites. The dive sites were stunning; with a greater variety and clarity than those I’d seen in Honduras and with a water temperature of 31 degrees, even at depth, it was boardshort diving conditions.  The highlight of the diving being the 20 or so Black Tipped Reef Sharks my instructor and I spotted off Phi Phi Ley island.

After three highly enjoyable and exhausting days we were accredited with our respective qualifications and could resume our daily focus of relaxing in our resort and watching the Swedes (the most chilled group of people I’ve come across after Canadians) wander back and forth.

For the final few days we shifted south to the Papillon Bungalows, a series of bungalows run by a Swedish couple encased within a jungle setting.  After a day of adjustment we came to love the jungle setting, and even more the quality of food available, including the traditional Thai dish of Swedish meatballs.

We filled our time with a day of fun diving, this time together, both undertaking our first cave dive, emerging in a pocket of air underneath an oceanic island and heading down to the next beach along, the beautiful, Klong Kong, sitting under an umbrella admiring the severity of burns on our fellow tourists amongst dips in the water.

Reluctantly we packed our bags at the end of our memorable time on Koh Lanta for our final two days in Singapore and Christmas shopping before heading to Perth and Australia, the end point of eight months of global travels. 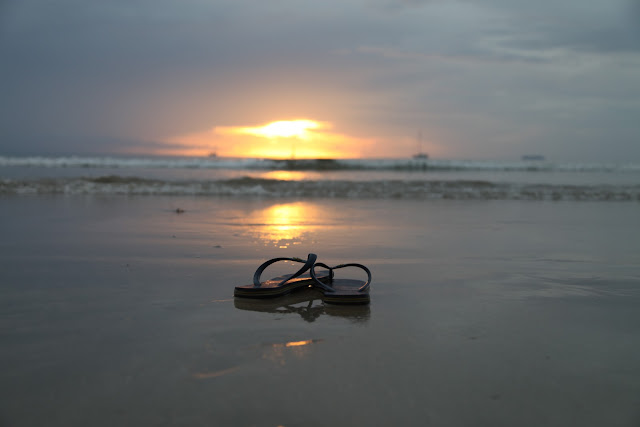