Islands in the stream

In 1982 Kenny and Dolly sang a song written by the Bee Gees about islands in a stream, a metaphor for the strength of a relationship between two people. Apparently the lyrics are drawn from an Ernest Hemingway novel, but I have my doubts.

A more likely scenario is that the Gibb brothers were inspired by a little reported week-long jaunt they took in the early 80’s down the meandering Mekong in southern Laos, visiting the idyllic islands along the way. Sure there is minimal to potentially no reference to Laos or the Mekong in the song, but this is part of their insights as songwriters, realising the need to bring in the relationship angle to channel their Mekong driven inspiration.  Their groundbreaking approach providing the template for such luminaries as Toto and Bernie Higgins to follow. 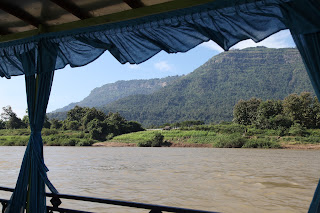 So it was as we set off from Pakse down the Mekong in a long tail boat towards Champasak that Susi and I were actually following in the tracks of the Gibb brothers from some 30 odd years prior. Champasak used to be the provincial capital of the region, but these days it’s a sleepy community on the banks of the Mekong. So sleepy is the town that at the height of the midday sun you could surely play a decent game of road cricket and probably have to halt play for slow moving buffalo more often than any vehicle traffic. We ‘d journeyed to Champasak as it provides a base for visiting Wat Phu, an ancient Khmer temple and the Laos version of Angkor Wat, although on a decidedly smaller and less grand scale, in a way symbolic of Laos in general.

Prior to visiting however we had an afternoon to spare and hiring two bikes and a small wooden twin hulled raft (plus boatman) ventured across to Don Daeng, an island about 4km in length resting quietly mid stream in the Mekong. 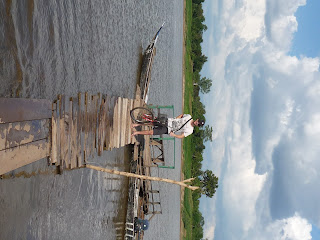 Reaching Don Daeng the boatman pulled up alongside the tiniest of wooden jetties and tying up his boat walked to his motorbike and then disappeared along the wooden planks that lead up in an ant line from the jetty, up the beach and into the jungle. Left to our own devices we duly followed, popping out into the first of many villages dotted around the island.  We spent the next few hours pedaling around the leafy island that was, with the exception of two people we met on arrival, completely devoid of other tourists. The island felt like it hadn’t changed in decades, with the soundtrack to our ride a mix of farmyard animal noises, the rhythmic drumming of monks in the afternoon sun and ‘Sabaidee!’ from children and adults alike as we rode along. Returning to our landing just before sunset our boatman magically appeared on the beach with his motorbike, parking it on the sand and then puttering us back to Champasak. 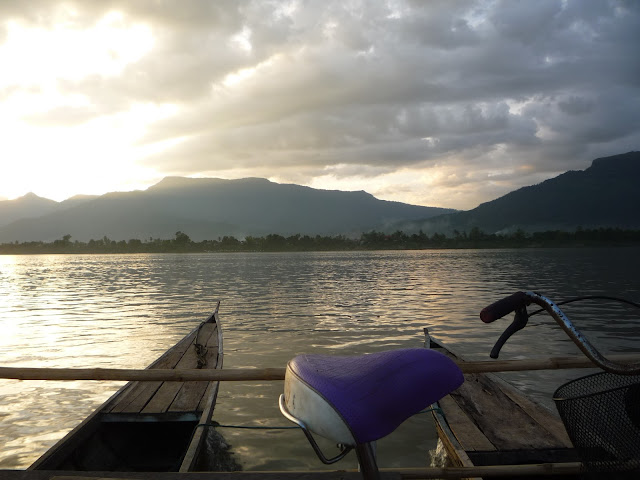 Having learnt from our trip to the Bolaven Plateau, the following morning we hired a motorbike each and steadily made our way to Wat Phu. While Wat Phu is interesting I actually enjoyed even more the freedom of having our own transport for a day and the ability to ride around, visiting sites, venturing along dirt tracks and stopping at our leisure. 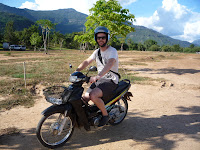 Leaving Champasak behind we bussed it for a few hours south before changing to a small boat for the short journey across to Don Khon, an island in the Mekong that’s part of the area known as the Four Thousand Islands.

Don Khon and the adjoining island of Don Det are the main hubs for travelers to enjoy the Four Thousand Islands, with both islands containing numerous riverside bungalows overhung by palm trees. Our intention was to stay on Don Khon, the more upmarket of the two and then move over to Don Det after a few days. Clambering up the muddy slope where our boat dropped us off we by chance happened on a huge and vacant guesthouse with all the essentials, hot water, mosquito net and wifi, at a very reasonable rate. Each day we’d discuss moving, but were on such a good wicket that we couldn’t see the point.

Compounding this it was also apparent after a day or so that all the ‘sites’ were located on Don Khon.  It’s not a problem travelling between the two islands via the historical French built bridge, however the Laos government has placed a daily levy on tourists visiting Don Khon and somewhat like the troll in Three Billy Goats Gruff a bored Laos chap sits patiently in a little hut nabbing tourists who cycle or wander past to pay the levy. 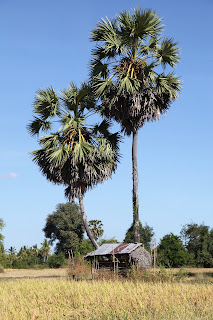 We also found out he’ll try and levy it on those staying on Don Khon who try to walk past him. In a concerted effort to avoid paying this and with time on our hands, each day we devised a route that wound overland between ant ridden bushes and through dried out rice paddies that allowed us to circumnavigate our toll man.

Life on the islands is slow and it’s the reason they attract so many travelers.  Our days were generally spent rising late and then slowing riding our bikes to another waterfall or beach on the banks of the Mekong before heading home for a late afternoon beer with the setting sun.

While many a traveler continue the short distance across the border into Cambodia, we, like the Bee Gees before us, had been inspired by our time on the islands and headed back to our southern Laos base of Pakse.
Posted by Rob Turk at 05:21