As I understand modern football coaching philosophy players are taught that in any one game of football there are effectively three possible phases; you control the ball, they control the ball or, no one really controls the ball and the game is in a state of transition with players madly running around trying to regain control. So it was as we departed Turkey we were entering a period of transition as we scrambled our way through five locations in just over a week; from Turkey to Dubai, onto Singapore then Thailand and eventually southern Laos.

Our time in Turkey will always be fondly remembered for the host of amazing experiences we had and friendliness of the people we encountered.  Checking in at Istanbul gave one last opportunity for the counter staff to marvel at my surname before giggling when I checked in the now globe trotting market trolley. Ingeniously I’d purchased a small roll of office sticky tape while rolling to the airport in the hope of securing the trolley for its maiden flight.

After a brief stopover in Dubai we landed in Singapore and with the exception of a previous 15 hour or so layover several years ago, it was a place I’d never been to before except in transit.  Luckily for us a colleague of mine, Rob Hobson, is now living in Singapore and we were able to avail ourselves of his lovely old colonial townhouse in central Singapore for our time there. 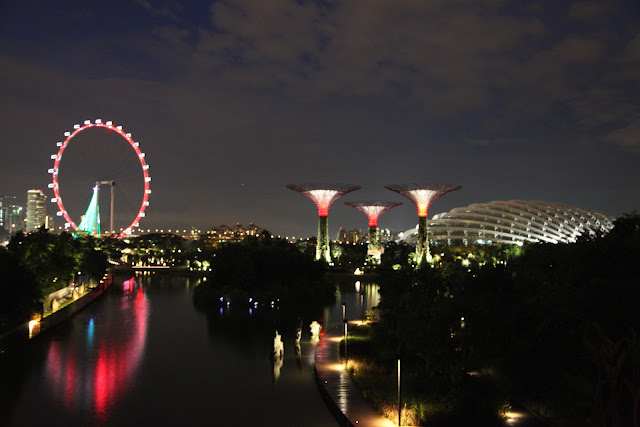 As Rob explained and I was vaguely aware, Singapore if often referred to as ‘Asia 101’, meaning it’s in Asia but it’s clean and efficient and doesn’t provide the gritty no holds bar experience that its surrounding neighbours can offer.  As such it’s often perceived as being a tad dull.  I’m sure the Singapore Government has realised this as over the past few years the city has gradually transformed itself with world class developments such as the impressive Marina Bay Sands. It also feels very much like a city in transition having benefited, like Australia, from proximity and relations with China.

As a backpacker on a reasonably tight budget such developments don’t hold a huge amount of interest, and with beer starting at $12 a pint I have the impression that future development is not seeking to court such a crowd.  These developments have however seen the proliferation of rooftop bars across the city and on a typical balmy Friday evening Rob kindly took us on a tour of them, enabling us to nurse a very expensive beverage at each location.

While the majority of our time in Singapore was spent enjoying the simple joys access to a home provides, like the ability to wash our own clothes and a bowl of cereal, we did manage a visit to the latest Singapore development, and World Architect Festival, World Building of the Year, Gardens by the Bay.

On the surface the first question that struck me is why? I can understand that it’s obviously been developed as a tourist attraction, but to artificially cool the climate in such a large volume of air and significantly reduce the humidity at the same time undoubtedly requires a significant amount of energy.  Following this line of thinking, prior to visiting I’d pitched the development in the same ballpark as the artificial skifield within a Dubai shopping mall.

My opinion changed however after our visit to Gardens by the Bay with Rob and Susi on a typically humid Saturday afternoon, interspersed with the occasional tropical downpour.

Approaching the sprawling complex through a rambling tropical garden I could see numerous flanged cylinders protruding into the sky. I was to learn in the later part of our visit that as well as a providing an interesting sculptural park and future vertical garden, these structures, referred to as ‘Supertrees’, are at the heart of a site wide and leading edge approach to energy, water and waste management.  The structures not only act as funnels to collect water at the site, but are lined with solar panels for the generation of electricity, and finally enable the venting of fumes from the biomass co-generator buried beneath the site.

Dashing to the complex through the tail end of another downpour we entered the first of the domes, Cloud Forest.  To be honest I was a little underwhelmed by the actual experience itself which consists of an artificial hill with various levels that can be accessed and provide information on the type of vegetation typically found at each level. It’s interesting, but I think once the vegetation has grown a bit more might be more impressive. There is a sombre part of me that wonders if we’ve lost so many areas of natural biodiversity that we’re now having to create our own biospheres as examples for future generations, much the same as zoos have done with endangered species.

For some reason I preferred the Flower Dome, sure not very manly of me, but maybe because its cool and dry climate included a collection of plants I instantly recognised in the Australian-a section, including the ubiquitous Grass Tree. 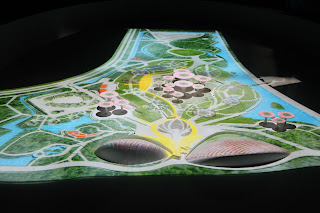 I think however what I really enjoyed, and what turned my thoughts on the development were the educational displays on the lower levels. As well as a funky 3D model illustrating, through different combinations of lights, the integrated approach to energy, water and waste management across the site, the area also included an excellent video on the projected changes to the Earth under different global warming scenarios, up to a +5oC change.  Looking around it was evident that the video captured the attention of the gathered throng, and given it’s on constant repeat is surely an effective communication strategy.

I walked out of Gardens by the Bay having reversed my former judgement and was impressed by not only the holistic approach to providing optimal energy, water and waste solutions, but also the significant educational component. 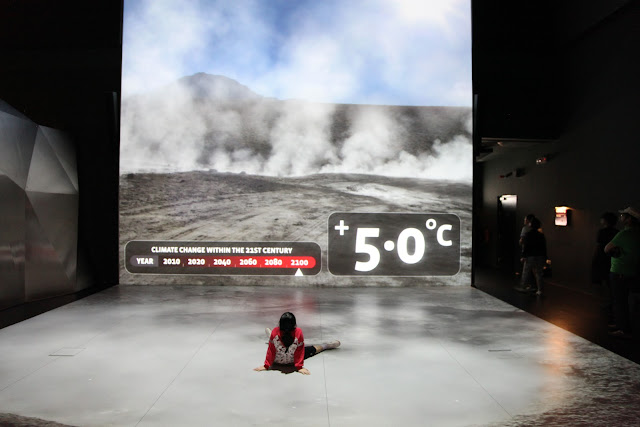 Leaving Singapore behind we hurriedly made our way to the airport seeking to regain control and looking forward to Laos.